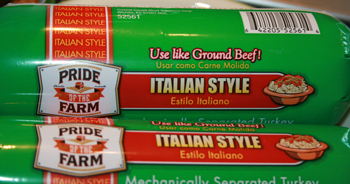 In our undying effort to save as much money as possible I’ve learned that you have to try new things; Sometimes you can literally save hundreds of dollars per year just by changing a single item in your families grocery budget. Our latest attempt attempt at saving cash was a complete Frugal FAIL.

Aldi’s (a grocery store I frequent) offers ground turkey for $1.14 per pound. It’s in the frozen food section of the store and it’s low in fat and quite delicious. So, a few days ago when I spotted this “Italian Style” ground turkey at Walmart, I thought we’d give it a taste test. It stated something on the package that should have stopped me in my tracks, it read, “mechanically separated” – which essentially means that it’s created much like hot dogs are. (For those of you that don’t know what’s REALLY in a hotdog – let me tell you, there’s a reason they call them “Lips & @ssholes”).

After thawing it, I cut one end of the package open and it was rather difficult to get past the visual. It was a very smooth nasty pink color and texture, not at all like you’d expect from ground turkey. The seasonings were pungent to say the least and the smell of the raw meat literally made me gag. Folks, I’m not your average joe- I’ve raised and butchered my own meat and chicken and I also hunt- the point I’m trying to drill home is that I’ve smelled some nasty things in my life, I don’t get grossed out easily, this was right up there with the worst of them!

I figured that there was NO way I’d ever be able to get the family to accept this “meat” as burger, so I formed little meatballs and roasted them for a taste test. I heated some marinara sauce for dipping and when they were ready I hollered to the kids and their buddies to come in for a “snack”. None of the kids liked them and I was unable to get past the texture in my mouth and the odd spiciness that had little to do with “Italian” and was more like a sausage seasoning.

Polite as she could be, my sons gal pal made a rather odd face and excused herself, heading out the door. I went out to check on her and that child was literally puking. Not only was this nasty product a frugal fail- but it literally made a child vomit.

Aye, so here’s the rub- I HIGHLY recommend avoiding any product that states in bold letters, “Mechanically Separated”, Lesson learned.