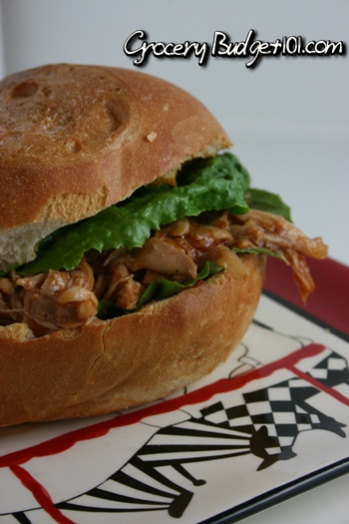 Barbecue Chicken Club sandwiches are by far one of the most filling, simple to prepare, dirt cheap recipes.

This particular recipe was thrown together using the chicken leg quarters that we mentioned in the weekly menus (which was a little less than .50 per pound). I simply boiled the entire ten pounds and vacuum sealed the meat in packages for later use.

We prefer to use french bread for recipes for the entire family to make rather large sandwiches that can be divided up. The reason for this is that it’s more filling, it’s cheaper to prepare and it considerably faster than making individual sandwiches.

Mix the butter and garlic and spread liberally on the french bread. Place it in a 400F oven, and lightly toast.

In a saucepan, combine the cooked chicken and BBQ sauce, simmer for 5-7 minutes. Remove the french bread from the oven, add lettuce, if desired, spoon the BBQ chicken over the entire loaf, cut into sections and serve with a pickle or homemade chips.

Now for the Grocery Budget 101 Breakdown: