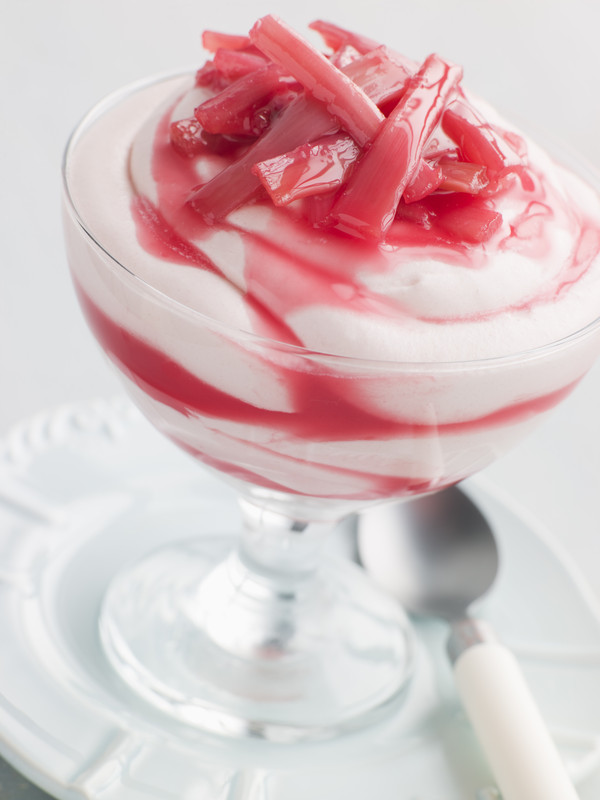 Fresh rhubarb offers a sweet-tart flavor on it’s own, but pair it with a touch of candied ginger and a bit of maple syrup and you have the perfect dessert.
I’ve had people ask why this recipe is called Rhubarb Ginger Fool- well folks, it’s simply because the recipe is so darn easy, even a Fool could make it!

In a heavy saucepan combine the rhubarb pieces and about 1/2 cup of maple syrup and the candied ginger, bringing it to a boil over medium heat. Once boiling, reduce heat, cover and simmer for 5 minutes. Uncover and simmer (to reduce) for about 25 minutes. The sauce will be thick, like a puree. Be sure to stir every few minutes, particularly near the end to prevent scorching.

Remove from heat and cool completely.

While the Rhubarb sauce is cooling, whip the cream until thickened, adding in the remaining maple syrup, yogurt and vanilla. Continue whipping until soft peaks form.

4 (79.41%) 34 votes This simple no-bake Strawberry Eclair Cake will melt in your mouth, literally. It’s full of decadent strawberries surrounded by vanilla cream and lightly drizzled with chocolate; Oh, and if that wasn’t […]

4 (80%) 33 votes These lightly sweetened cranberry and cinnamon enhanced pink pears are simple and make a delicious healthy dessert or snack.