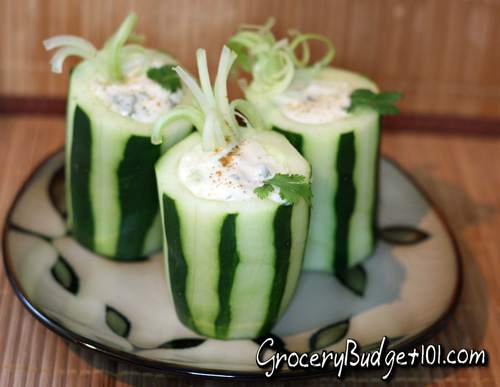 Cucumber Raita is an Indian Yogurt sauce that combines the flavors cilantro, cumin and coriander, yet the spicyness is balanced with cooling effects of fresh cucumber into a mellow sauce that is excellent on flatbreads, as a side dish with Tandori chicken and more!

Peel the cucumber (toss the peelings), cut it in half, exposing the seeds. Scrape out the seeds with a spoon, discard. Using a cheese grater, grate the cucumber into a colander. Since our colander has fairly large holes, I lined it with a coffee filter to prevent the grated cucumber from falling through. Let it set for 10-15 minutes to drain well. 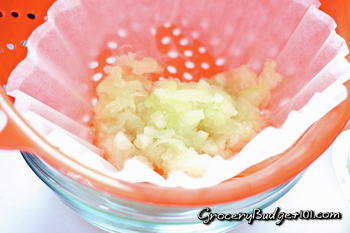 While it’s draining peel the fresh ginger. You’ll need about half an inch to end up with 2 teaspoons of finished product. Grate it with a very fine grater and set aside. Make sure you avoid having large pieces as ginger is very strong! In a small bowl combine yogurt, coriander, cumin and salt, mixing well. Add the fresh ginger, mixing well.

Add the coarsely chopped cilantro and well drained grated cucumber into the seasoned yogurt mixture, mixing well to combine. Cover and let set in the fridge for at least an hour before serving.

Another serving suggestion- Cut a cucumber in half and cut each of the halves in half, giving you 4 equal pieces. Partially peel the cucumber pieces leaving a strip of green, every other slice. Hollow out the center of the cucumber pieces using a melon baller.

Serve as is with Tandori chicken or as a side sauce for flatbread sandwiches, Indian chicken, etc.

Here’s how we came up with the cost:

Cucumbers are frequently 2 for $1 during the summer months- a bunch of cilantro was .79 – so really we used about .05 worth. However, keep in mind that cilantro is super easy to grow in the windowsill of your kitchen and provides excellent flavor in various dishes. Plain Yogurt is $1.99 at walmart for a 2lb container, there are 4 cups in a 2lb container = .50 – Fresh ginger root is about $3.50 per pound, but you’re using less than 1/4 of an oz.