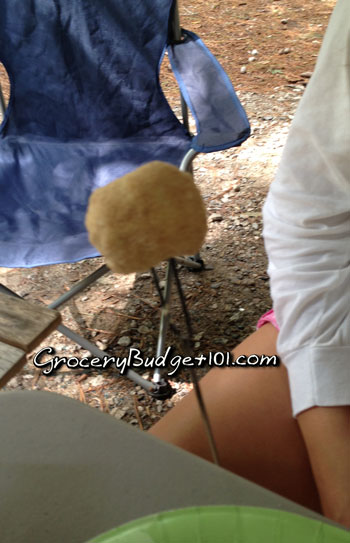 Just a couple simple ingredients create a melt in your mouth burst of cinnamon with flaky layers for simple campfire breakfast the kids can make themselves.
I realize that most of your Northerners are probably thinking, “Camping?? In November? Are you people crazy?”, but this is just the beginning of decent camping season here in the South. This one is great around an evening campfire too.

A Hot Campfire
1 Tube of Biscuits (such as pillsbury grands- but the store brand will do nicely)
Softened Butter
Marshmallows- cheaper isn’t better, kraft works best, other brands will not melt completely.
Cinnamon/Sugar Mix
Campfire Sticks for roasting marshmallows over the fire 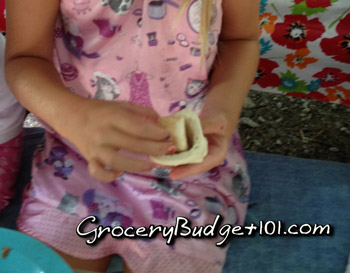 Part of the fun of this recipe is letting the kids figure out which method works for them. I personally like to slice the biscuit almost in half and then shove the marshmallow in the middle and seal the dough up tightly around it.

Insert a marshmallow roasting stick into the cinnaburst ball. If you’d like, you can roll it in cinnamon and sugar again. Roast over the fire until golden brown and puffy. Try not to hold it directly into the flame as it will catch on fire and be blackened on the outside and raw in the middle.

Marshmallow may start to drizzle out the hole created by the stick! The marshmallow will completely melt into the biscuit creating a delicious cinnaburst bun! 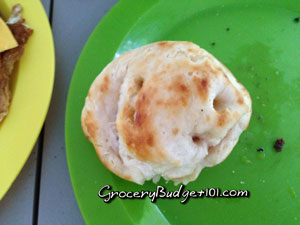 Sorry, I didn’t get a chance to take a photo of the inside, the kids Devoured them too quickly!