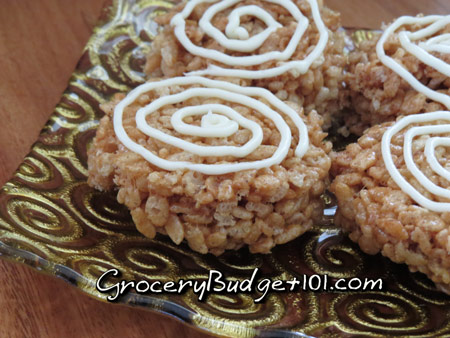 If you adore the flavor of Cinnabon cinnamon rolls and enjoy rice krispy treats, let me introduce you to the amazing no bake Cinnamon Bun Rice Krispy delight . . the best of both worlds merged together and topped with a swirl of delectable cream cheese frosting.
This is a delicious recipe to make when you’re craving hot cinnamon buns, but don’t want to heat up the entire house by running the oven.

Line a 9×13 dish with aluminum foil and butter it lightly, set aside. In a large saucepan over medium heat, melt the butter. Add the marshmallows, stirring constantly until nearly melted and then add salt, molasses and cinnamon, stirring well. Continue stirring until the ingredients are completely incorporated like this: 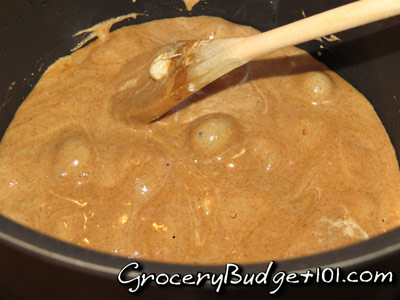 Remove from heat and add in the vanilla extract, stirring well, fold in the rice krispies and continue stirring until they’re evenly coated with the marshmallow mixture throughout.

Transfer the mixture to the buttered 9×13 dish and let it cool about 5 minutes. 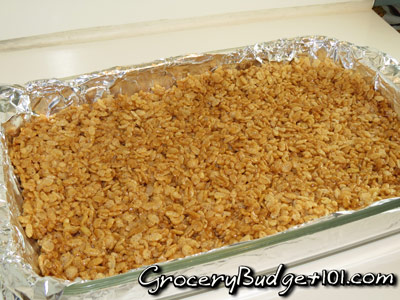 Grasp the edges of the foil and lift the partially cooked treats out of the 9×13 dish and set them on a solid surface. Butter a biscuit cutter lightly and and begin cutting out the “Buns” while still slightly warm. If you don’t happen to have a biscuit cutter you can cut the treats into equal squares and then “round” the edges with (well-buttered) hands. 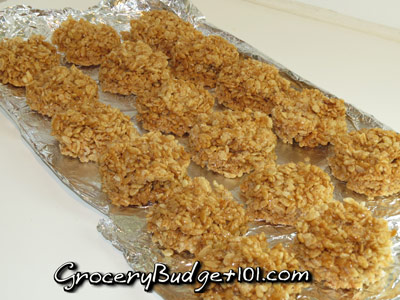 While they are cooling, combine the butter and cream cheese in a small bowl using a hand mixer, beat well until incorporated. Add the vanilla and powdered sugar and Whip all the ingredients until it becomes light and fluffy.

Spoon into a frosting bag with a pipe tip, or if you don’t happen to have a frosting bag on hand, spoon into a ziploc baggie. Cut off a small corner of the bag and use it to carefully (& slowly!) pipe the frosting swirls on top of each “cinnamon bun”. 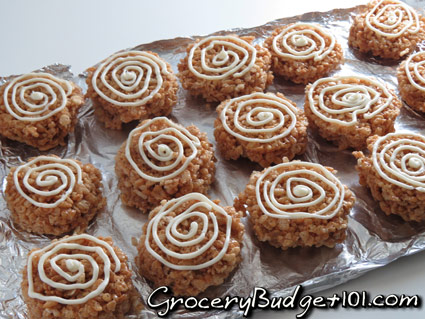 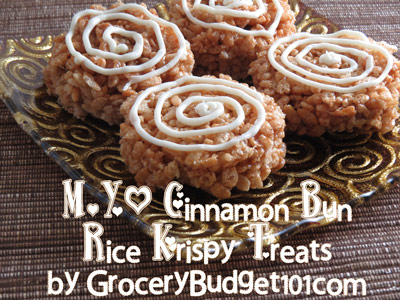