A succulent fruit salsa bursting with fresh kiwi, strawberries, apple, and plump berries and served with crispy baked cinnamon tortilla chips. A wonderful addition to any summer BBQ or gathering. 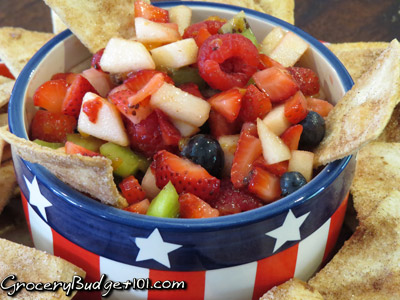 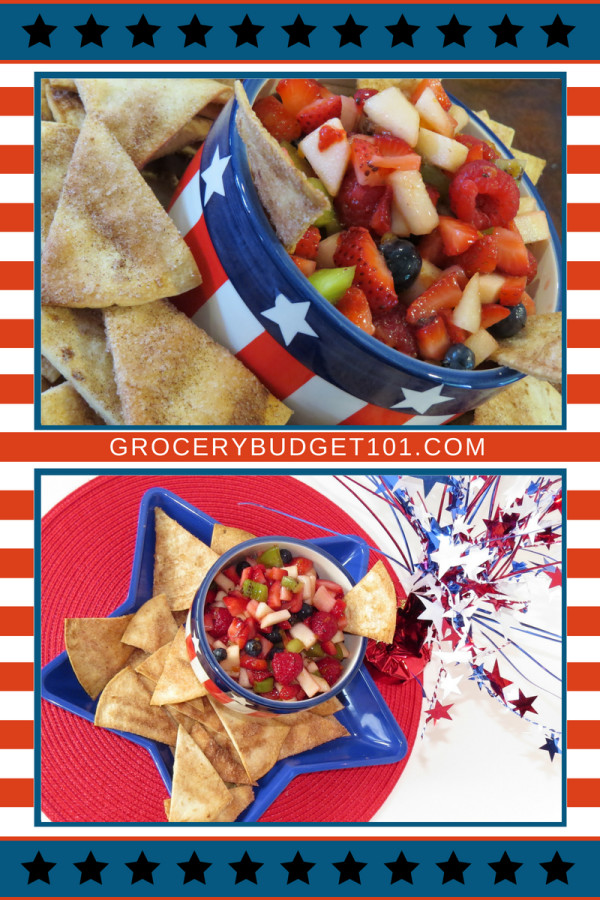 In a large bowl combine the diced apple, pear, strawberries, kiwi, blueberries and raspberries. In a small bowl mix brown sugar, white sugar and jam (we used homemade strawberry jam), pour over the top of the fruit and gently fold it in to mix. Place the fruit salad in the fridge and prepare the cinnamon tortilla chips

Using a pastry brush, lightly coat one side of each tortilla with melted butter. Sprinkle tortillas liberally with cinnamon sugar mix. Using a pizza cutter, slice the seasoned tortillas into wedges and carefully arrange them in a single layer (not touching!) on a large baking sheet. 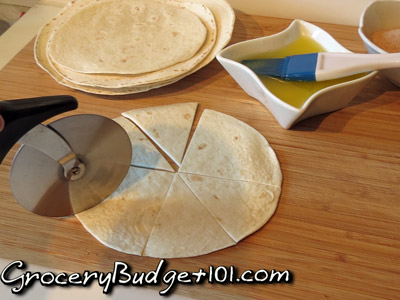 If you opted to use butter flavored cooking spray instead of melted butter, spritz them again with cooking spray just prior to putting them in the oven. 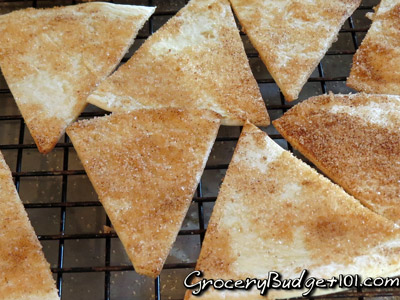 Bake for 7-9 minutes, or until crispy. Opt for the earlier time as these have a tendency to cook quickly!

If you’re bringing the dish to a party or gathering, or it’s it just too hot to bake your own cinnamon chips, you can also use cinnamon graham crackers.

This dish is best eaten the same day as it has a tendency to get rather soupy after setting for too long. 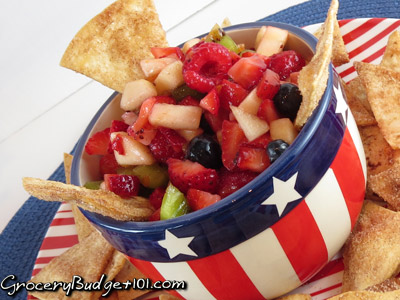 Some Tips & Tricks about the Recipe:

♥ If you’re concerned about the apple browning prematurely, you can sprinkle 1/2 tsp of Fruit Fresh over the fruit before adding the sugars/preserves.

♥ The brown sugar really deepens the flavors of the fruit. If the fruits and berries are really ripe, the sugars can be omitted altogether.

♥ This is a great way to use up stale tortillas

♥ Whole wheat tortillas can be used in place of plain flour tortillas, but be aware you’ll need to extend the baking time to 10-13 minutes in order to achieve crispy cinnamon chips.

♥ We used a Granny Smith apple because it’s a little more tart and doesn’t brown quickly.

This fruit salsa with baked cinnamon tortilla chips has been a long time favorite for us to bring to 4th of July parties due to the bright, festive colors and flavors. It’s well received and usually disappears first!