Apple fritters are a family favorite in our house and we throw them together for a quick, easy breakfast, snack, and sometimes and autumn dessert.

I prefer to cook ours in coconut oil but take note that not all coconut oils can be used for deep frying. It must be expeller-pressed and be able to be heated to 365F in order to deep fry with it. Coconut oil has a low smoke point, which means it can burn easily. 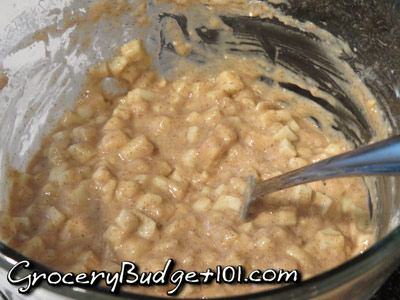 Spoon enough Coconut oil into skillet so that it is approximately an inch and a half (1 1/2″) deep, Heat oil on medium high.

To test the oil drop a tiny bit of batter into it, when the batter quickly floats to top and starts to sizzle, it’s time to cook the fritters. Carefully add dough by spoonfuls to the hot oil. Cook until brown, about a minute or so, then flip. Cook another 1-2 minutes, until both sides are browned. 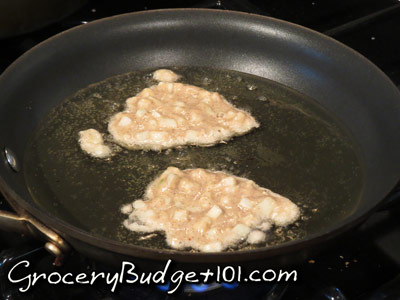 Make glaze by stirring the cider, cinnamon and powdered sugar together in a small bowl. If you don’t have cider, you can use milk.

Drizzle over apple fritters. Wait approximately 3 minutes for glaze to harden, then flip fritters and drizzle glaze over the other side. Best served warm.

4 (79%) 40 votes This is an absolutely amazing dish to mix up for dessert- a great way to get your kids to eat vegetables and the fun part is, they’ll have NO idea they’re […]

4 (80%) 33 votes Living in a sultry southern climate isn’t easy for a chick who LOVES to bake! Coming up with fresh, delicious desserts without heating the entire house isn’t always easy. Check out […]

GB101 Desserts, Make it Yourself, Recipes 1

4 (80%) 32 votes Make your own delicious Double Chocolate Peanut Butter Lava Cake, but be aware, this is the real thing and it is absolutely amazing!