Imagine plump Brussels sprouts cooked with bacon and glazed with seasoned apple cider and tossed with sliced almonds, this amazing side dish will even the pickiest of eaters into a fan of Brussels sprouts. . . 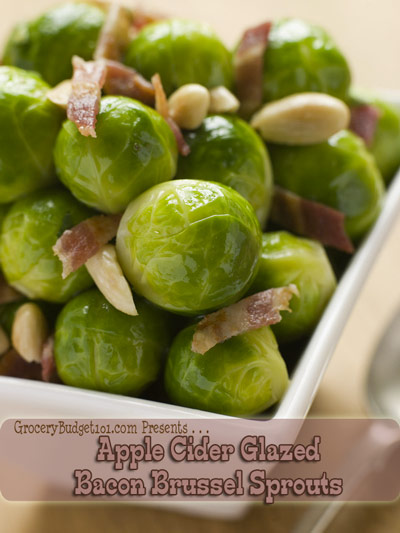 This easy to throw together side dish is a fantastic accompaniment to Thanksgiving or other Holiday dinners!

In a large skillet, cook bacon pieces over medium heat until crisp. Remove bacon from skillet with slotted spoon; drain on paper towels. Discard all but 1 Tbsp. drippings from the skillet. Immediately add the butter, stirring until melted, then add onions and Brussels sprouts to drippings in skillet; cook and stir on medium-high heat 1 to 2 min. or until Brussels sprouts are lightly browned.

In a small dish combine cider, sugar, salt, nutmeg, and pepper, mixing well, then pour over sprouts. Cook 5 min. or until liquid is evaporated and sprouts are evenly glazed, stirring occasionally. Stir in bacon.

Gently transfer the glazed sprouts into a serving dish and top with sliced almonds.